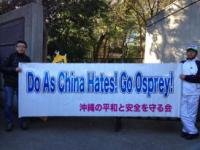 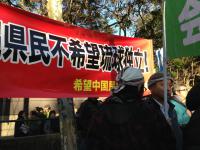 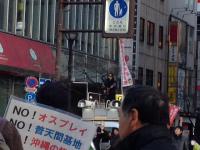 500 Protesters Demand the Deployment of the Osprey in Okinawa: A Typhoon Blocked the Anti-Osprey Rally on the Other Hand


Tsuiki Shugaku
Party Leader The Happiness Realization Party
We'll solidify the Japan-US alliance. We'll strengthen Japan's deterrence. If the Osprey is deployed, Okinawa will have much more effective defense and deterrence. The US forces exist here in order to
defend Japan, Okinawa, and Senkakus with risking their lives. We'd like to make this day a start to show to the world that people in Okinawa share rationality and common sense.

Kinjo Tatsuro
Executive Chief Okinawa Defense Project
We chose to participate today's citizens' rally over tomorrow's. This means that some of Okinawa's mass media are propagating a false statement that people in Okinawa unanimously refuse the Osprey.

Announce the Resolution（決議文の採択）
It is obviously irrational to attempt to manipulate the public opinio by agitating opposition against the Osprey deployment. Opposition to the Osprey is never a consensus of us, Okinawan people. The Japanese government must strengthen its defense of Senkakus by actively cooperating with the US government that is trying to replace obsolete CH-46 with MV 22 Osprey.